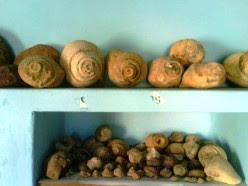 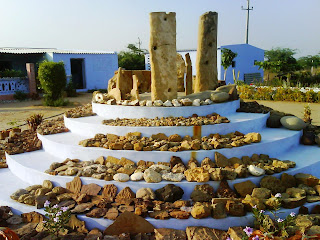 Mohansinh Sodha visionary man has faced lots of trouble in his life come up as hero and devoted his full life in collection of fossils which found in the land of Kutch district of India. We may conclude him as legendary personality living on goddess Earth. This collection of fossils we may count it as wealth of nation as well as for Geology too. Lets have his view on fossils and Kachchh Fossil park in his words.

Since long in the nineteenth century, Kutch attracted British officers by its varied landscape, ethnic variation, wealth and unique rocks of the barren hills. It was after the great triangulation survey by British administration in Kutch that they realized that unique fossil contents in the rocks of Kutch. They appointed several surveyors and researchers who did arduous field work and extensive study on the rocks, minerals and fossils of Kutch. A similar study was taken over by many Indian experts who were trainde in this subject. After identification of number of Jurassic, Cretaceous and Tertiary fossils of Kutch, the region became famous all over India and the entire world especially in various Geology Department.
Kutch was then accredited as famous fossil site in the world being a small geological basin, where numerous species of invertebrates and vertebrates fossils are found in a limited geographical area. Most of the jurassic, Cretaceous and Tertiary fossils have been identified by various research groups from Banaras Hindu University, Jadavpur University, Lucknow University, Rajasthan University, Sukhdiya University and many other groups from south and north Indian Universities.
General Information
A fossil is my trace of a once living organism preserved in rock, a relic of the earth's past. Much of what we know of our planet's history comes from fossilized plants and animals, some of which may be 600 million years old or even older. The tooth of an extinct bear, the claw of Dinosaur, and a flower from prehistoric plant preserved in aber are all fossils. When living things die, their bodies usually decompose in a short time but some times a plant or animal's body parts become buried out of reach of the factors that cause disintegration, and transform into a durable, rock like substance that survives for millions of years. This is how fossils form.

Importance of Fossils
Scientist who study fossils are known as Paleontologist. Over the past two or three centuries, they have learned much about the earth's past by studying fossils, for example, they often find fossils of sea creatures in rocks that today are on dry land, far from any bodies of water. Sometimes such fossils occur high up on mountain slopes. This tells Paleontologist that hundreds of millions years ago, what is now dry land and mountains was once water perhaps beneath a river delta of bottom of a lake or sea. studying fossils from different places around the world, paleontologist have also helped to confirm that the earth's continents slowly changed their position over millions of years of time.
Fossils teach us that the plants and animals of earth's past were vary from from those we see alive around us today. We also know that there were once Dinosaurs alive on earth, and roughly when humans first appeared on earth, and how long ago saber-tooth cats lived. No men was existed to see these things; we know about them just from fossils. it is amazing what fossils can teach us!

Way back in early seventies as an army personal I observed unusual form of rocks while wandering the barren hills of Kutch. This unusual rock a fossil Ammonote made a tsunami change in my conception of life. I migrated From Sindh province of Pakistan to Kutch leaving behind relatives and belongings way back in 1971 Indo-Pak war, and got involved with the army to offer valuable service then. The long exposure since then in studying and collecting fossils from Kutch is unexplainable in this para but the marvelous collection of thousands of fossils will certainly be a living records of skeletons and dead organisms as old as 150 million years.
Mohansinh m. Sodha, I formed a society, Kutch Fossils Park in 2002. perhaps, it is the first stone of great fossil museum in Kutch. the homeland of Fossils. Another aspect to be noted is the accredition given, after a new vertebrates fossil species was found from western kutch. the research was carried out by Roorki Institute Of Technology scientist on the vertebrates Sea-cow fossil collected by me as new species in india, so they decided to give its name after me. The species will be known as Dommingia Sodhae.